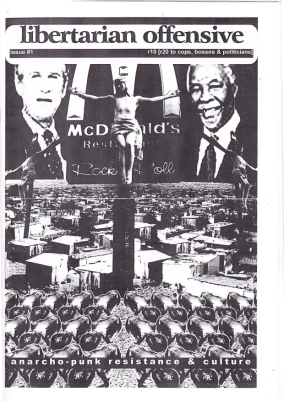 This was a one-off zine directed at the South African punk scene, and was loosely linked to Zabalaza Books. Contents included:

Action reports
– international day of action and festival of life and justice against war and occupation
– anarchism in action: the phambile  motsoaledi community  project

Features
– pirate utopias, under the banner of king death, from ‘do or die’ journal of radical ecology
– the philosophy of atheism by emma goldman

According to the editorial, the focus was to try draw members of the punk scene into anarchism (see below). Also of particular interest are the articles on the Phambile Motsoaledi Community Project (a social centre in the Motsoaledi squatter camp in Soweto) and the Zabalaza Books project- both of which were closely linked to the Zabalaza Anarchist Communist Federation (now Front) (or ZACF).  Also mentioned in the editorial is the South African chapter of the Anarchist Black Cross, again linked to the ZACF. The ZACF is a direct successor of the Workers Solidarity Federation: on the ZACF, read here.

Back to the editorial: “Libertarian Offensive was created with a three-fold objective in mind. Firstly, to inform and educate people within the local punk scene, and hopefully other sub-cultures of rebellion, about the social and political conditions in South Africa ten years into so-called liberation, and to give ideas and examples as to how people who actually give a shit can get actively involved to bring about change.

“Secondly, to promote and spread awareness about the DIY punk scenes in South Africa internationally, developing and broadening the international underground / DIY network and hopefully, through promoting international DIY bands locally, make it viable for them to visit South Africa.

“And finally, a desperate attempt to break the fucking isolation of being one of very, very few politically active punks in a country that is not only systematically oppressing its own people, but also plays a huge role in perpetuating the ongoing political and economic crisis throughout the continent.

“Libertarian Offensive is intended to be a viewed as a contribution to the development of a collective understanding of the nature of the society in which we live, i.e. a capitalist or ‘class’ society, and how we as people active within the punk community can expand our culture as a medium for pushing forward our ideas and practices in creating a ‘culture of resistance’, which can launch a sustained attack on the status-quo in search of radical social change.

“Any proceeds generated from the sale of Libertarian Offensive will either go directly back into the printing of more copies; donated to an anarchist publishing project called Zabalaza Books or to the South African chapter of the Anarchist Black Cross, both of which you will find out more about within the contents of this zine.”