Nicole Ulrich, 2006, “Remembering and Learning from the Past: The 1976 Uprising and the African Working Class,” Zabalaza: A journal of southern African revolutionary anarchism, number 7, pp. 22-23.

This year [2006] marks the 30th anniversary of the 1976 Soweto uprising in South Africa, which marked the start of the fall of apartheid, and inspired activists worldwide. African working youth played a leading role, and their sacrifices showed us that ordinary people can make a difference to the injustices of our world. Revolutionaries should commemorate this struggle, but also learn from its failings.

The 1976 uprising was sparked by the imposition of Afrikaans-language teaching in African schools, seen as an act of national oppression. But there was more at play. The 1970s saw growing inflation creating much discontent amongst urban African youth. South Africa’s economy, which boomed in the 1960s, entered crisis in the 1970s. Unemployment grew steadily, reaching levels unseen for decades.

This was fuelled by under-funded, racist and authoritarian government institutions like the local government township administrations, the Bantu Education system and the miserable conditions in the segregated township schools. Although the government and large companies such as END_OF_DOCUMENT_TOKEN_TO_BE_REPLACED

Mechanisation and automation have been called the Fourth Industrial Revolution. But these are not inevitable or neutral economic realities. They are political weapons of oppression under capitalism. It is a war against the working classes to increase profits. It is no an accident that bosses choose to mechanise and automate in the context of the massive crisis of capitalism.

Recently, the accounting multinational company, Grant Thompson, conducted a study amongst 2500 multinational corporations regarding mechanisation, automation and the introduction of artificial intelligence. Of these companies, 56% said they planned to automate parts of their operations within the next year. Another study by Oxford University was even starker. It stated that 47% of jobs in the United States and possibly 50% of jobs in parts of Africa – including South Africa – could possibly be lost to artificial intelligence, mechanisation and automation in the next two decades. It is clear that if this transpires, the consequences will be dire for workers in Africa – including South Africa – and their ability to organise.

Some people have said that this move to use advanced computers and automation is the ‘Fourth Industrial Revolution’; and that the inevitable advance of technology END_OF_DOCUMENT_TOKEN_TO_BE_REPLACED

Shawn Hattingh and Mandy Moussouris, 2018, “The Humans who Control the Machines are the Real Threat,” Business Day, 27 March, from here

The late Stephen Hawkins had the following to say about the onset of the so-called 4th Industrial revolution: “If machines produce everything we need, the outcome will depend on how things are distributed. Everyone can enjoy a life of luxurious leisure if the machine-produced wealth is shared, or most people can end up miserably poor if the machine-owners successfully lobby against wealth redistribution. So far, the trend seems to be toward the second option, with technology driving ever-increasing inequality.”

What Hawkins was highlighting in this statement is that in a different society, machines could be of benefit to all of humanity. However, in the current class based capitalist society, machines pose a dire threat to the majority of people and the onset of the 4th Industrial Revolution will lead to the vast inequalities that already exist increasing exponentially.

World Bank statistics show that currently automation is responsible for 17% of production and services, in 15 years this is projected to rise to 40%. A common held belief by most of the middle class is that automation is a threat only to blue collar workers but this is becoming more and more untrue. The full computerisation of bank tellers, clerks, bookkeepers and pharmacists jobs is an increasing reality and will soon start affecting the work of teachers, doctors, pilots and architects. To understand why mechanisation and automation is being rolled out today; and why this poses such a threat, it is important to understand how they have been used under capitalism in the past and for what purposes.

Shawn Hattingh and Mandy Moussouris, 2018, “An Experiment for a Better Life is Under Way,” Business Day, 5 March, Business Day, from here

The Rojava Revolution lays down tracks to building a better, more democratic and more feminist society.

The world is facing an economic crisis on a scale last seen in the 1930s. It has resulted in living conditions and incomes of workers and poor people — and increasingly the middle class — being eroded by governments through austerity and by businesses through rationalisations and wage freezes.

Like the 1930s, this crisis is triggering the rise of extreme right-wing regimes and right-wing populism. It is also resulting in an increase in global conflict and threats of war, with Syria a key example.

But in the heart of the raging war that is Syria, there is a glimmer of hope.

In the north of Syria bordering Turkey and Iraq, the Kurdish and Arab people END_OF_DOCUMENT_TOKEN_TO_BE_REPLACED

The 1990s upsurge of anarchism found one expression in South Africa, where the anarchist and syndicalist tradition re-emerged after a break of decades. But this was not unique in English-using African countries. A substantial section of the Industrial Workers of the World (IWW) was formed among diamond miners in Sierra Leone, but destroyed in the country’s ongoing civil war in 1997, leading members ending up … END_OF_DOCUMENT_TOKEN_TO_BE_REPLACED

Moussouris, Mandy, 2009, “Love, Liberty and Learning: The Problem with Skills in Revolution – An Anarchist Perspective on Trade Union Education in COSATU” (Honours research dissertation, in Industrial Sociology, University of the Witwatersrand). Get the PDF here. END_OF_DOCUMENT_TOKEN_TO_BE_REPLACED

Mandy Moussouris, 2007, “Between Class Struggle and the ‘Developmental State’: COSATU and the Sector Job Summits, Lessons in Corporatism,” paper presented at “Labour and the Challenges of Development” conference, Global Labour University, University of the of the Witwatersrand, 1-3 April. Get the PDF here. END_OF_DOCUMENT_TOKEN_TO_BE_REPLACED

SAFTU: The tragedy and (hopefully not) the farce

The labour movement has been unable to de-link itself from its archenemy: capital. As its structures bureaucratise, as its leaders become career unionists, as it opens investment companies and pays staff increasingly inequitable salaries, it increasingly mirrors the very thing it is fighting. If the South African Federation of Trade Unions is to meet its promise, it must be fundamentally different from the organisation it was born out of.

The tragedy of the disintegration of the Congress of South African Trade Unions (COSATU) happened slowly. As tragedies go, COSATU’s has been far less dramatic than most; it has rather been a sad slow and painful unravelling of a once vibrant and powerful organisation over 20 odd years. The unravelling of an organisation that forgot that the whole is made up of the sum of its parts; that continuously made the mistake of allowing personalities to undermine democracy, ambition to undermine equity and bureaucracy to undermine equality and democratic participation.

COSATU’s decay has had a significant impact on the South African working class. The impact has reverberated across the country in a myriad of ways and has been the result, both directly and indirectly, of COSATU’s failure to effectively and democratically represent the working class. This has been the case partly because of its alliance with the ANC and partly because of its (and the trade union movement in general’s) inherently defective organisational structure and patriarchal culture.

From the same ashes comes the rising of a new phoenix – a new hope for the South African working class – the South African Federation of Trade Unions (SAFTU). But the labour movement, broadly, has never been good at learning from its mistakes and this time around appears to be no exception. We can no longer make the mistake of thinking that changing the world is as simple as changing the colours of a flag. If we are to learn anything from history, it’s

END_OF_DOCUMENT_TOKEN_TO_BE_REPLACED 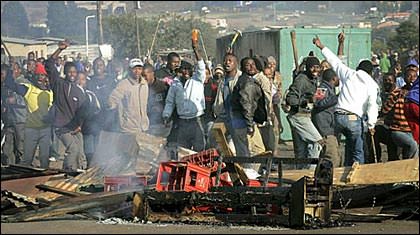 END_OF_DOCUMENT_TOKEN_TO_BE_REPLACED

The xenophobic violence and looting following King Zwelithini’s statement that foreigners “pack their bags and leave” spread to cities and townships across the country. However, the recent attacks are not an isolated incident; nor is Zwelithini solely responsible for fomenting it. Local elites – particularly those linked to the ruling party – also encourage anti-immigrant attitudes and actions. This article, based on discussions with Abahlali baseFreedom Park activists, looks at how local elites stimulate ‘xenophobia’ to protect their class interests, as well as how progressive working class activists have responded.

Freedom Park is among few townships where development is underway; END_OF_DOCUMENT_TOKEN_TO_BE_REPLACED

A sharp increase in fuel prices on Wednesday 6 September will hit the working class and poor hardest. Petrol, diesel and paraffin now cost 67c, 44c and 65c more, respectively. This is the fifth fuel increase this year. Economists have warned more will be disastrous.

The reality is rising prices get passed directly onto ordinary people by, for example, increases in taxi fares and food prices. LP gas, which with paraffin is the main fuels used in poor households, END_OF_DOCUMENT_TOKEN_TO_BE_REPLACED

Once again much media fanfare has broken out in aftermath of the South African state’s budget speech.  The business media in particular have fallen all over themselves to highlight how the state will be spending billions of Rands on infrastructure and the development of ‘Special Economic Zones’, supposedly to create employment and help the poor to find a job. Much too has been made of the state spending over 50% of the budget on social services. Most of the messages, whether from the state or mainstream media or even SACP politicians, therefore have been about how the budget is intended to help the poor and drive job creation. Like a missionary of old, we are told, the Minister of Finance, Pravin Gordhan, has given hope to the dispossessed and has extended a hand to the most marginal sections of society through the budget. Of course, Gordhan, the media, the state, ANC and SACP politicians are lying through their teeth when they declare that the budget was developed for the benefit of the poor and workers. Like missionaries of old, the state, the politicians and media are trying to create illusions to blind the people to reality.

Do states really exist to help the poor?

States, including the post-apartheid state, have never undertaken actions that are purely aimed at assisting workers and the poor; unless they have been forced to through class struggle. As such, people including the SACP, make a fundamental mistake when they believe that the state is either a neutral entity or that its actions – including the South African state’s budget – are intended to further the interests of the working class. When one examines the historical role END_OF_DOCUMENT_TOKEN_TO_BE_REPLACED