Peter Cole & Lucien van der Walt, 2011, “Crossing the Color Lines, Crossing the Continents: Comparing the Racial Politics of the IWW in South Africa and the United States, 1905-1925,” Safundi: The Journal of South African and American Studies, Vol. 12, No. 1, January 2011, 69-96 PDF is here ABSTRACT: In two of the planet’s most highly racialized countries, South Africa and the United States, … END_OF_DOCUMENT_TOKEN_TO_BE_REPLACED

The following 1993 text by the late Baruch Hirson, South African Trotskyist, provides some insight into the South African syndicalists of the early twentieth century. A reader can quibble over the focus on Archie  Crawford and Mary Fitzgerald (whose ideas were always rather mixed), as well as regret the closing in 1917 (many of the most important developments took place in the late 1910s). But credit must be given where credit is due: Hirson played an unmatched role, over many years, in recovering the history of South African left traditions ignored or caricatured in the South African Communist Party and academic accounts. Although his interest was in the Communist Party and the Trostkyists that emerged subsequently, his work also touched on the anarchist and syndicalist tradition, as this interesting paper shows. END_OF_DOCUMENT_TOKEN_TO_BE_REPLACED

This article was published by Lucien van der Walt in Direct Action (Australia, Summer 2001) as “Many Races, One Union! The IWW, revolutionary syndicalism and working class struggle in South Africa, 1910-21.” It was reprinted in Bread and Roses (Britain, Autumn 2001) as “A History of the IWW in South Africa.”

Note: An incomplete version has also appeared on the internet under the title “1816-1939: Syndicalism in South Africa,” described as “a short history of radical trade unionism, class struggle and race in Southern Africa in the 19th and 20th centuries.”  The dates are wrong (there was no syndicalism anywhere in 1816, and while the IWW-influenced ICU would last in Zimbabwe into the 1950s, there was no syndicalism in South Africa in 1939) and several paragraphs are missing, in that version.

For PDF of scanned Bread and Roses version: click here

Lucien van der Walt, Autumn 2001, “A History of the IWW in South Africa,” Bread and Roses

The Industrial Workers of the World (IWW), and the ideas, goals and organisational practices for which it stood, had an important influence on the early labour movement and radical press in South Africa. It also had an impact on neighbouring Namibia, Zambia and Zimbabwe.

Furthermore, at least five unions were founded on the IWW model in this period. Four of these unions pioneered the organisation of workers of colour, most notably the Industrial Workers of Africa, the first union for African workers in South African history END_OF_DOCUMENT_TOKEN_TO_BE_REPLACED

Click here for PDF This paper examines the development of anarchism and syndicalism in early twentieth century Cape Town, South Africa, drawing attention to a crucial but neglected chapter of labor and left history. Central to this story were the anarchists in the local Social Democratic Federation (SDF), and the revolutionary syndicalists of the Industrial Socialist League, the Industrial Workers of Africa (IWA), and the … END_OF_DOCUMENT_TOKEN_TO_BE_REPLACED 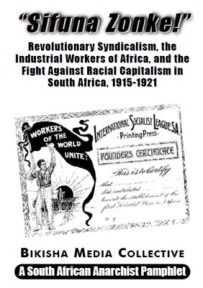 Revolutionary syndicalism – the strategy of bringing about a stateless socialist society through a revolutionary general strike in which organised labour, through its trade unions, seizes and places under self-management the means of production – played a central, but today, largely forgotten, role in the early twentieth-century South African labour movement.

Before the 1920s, it was revolutionary syndicalism, which is rooted in the classical anarchism of Mikhail Bakunin, rather than the dry Marxism of the Second International, which dominated the thought and actions of the radical left in South Africa. And so it was, ultimately, classical anarchism that pioneered labour organising and anti-racist work amongst workers of colour in South Africa: the nationally oppressed Coloured, Indian and African proletariat. END_OF_DOCUMENT_TOKEN_TO_BE_REPLACED

Click here for PDF The Industrial Workers of the World (IWW), and the ideas, goals and organisational practices for which it stood, had an important influence on the early labour movement and radical press in South Africa. It also had an impact on neighbouring Namibia, Zambia and Zimbabwe. Furthermore, at least five unions were founded on the IWW model in this period. Four of these … END_OF_DOCUMENT_TOKEN_TO_BE_REPLACED

The interests of the Working Class and of the Employing Class are diametrically opposed. There can be no peace as long as hunger and want are found among millions of working people, and the few, who make up the employing class, have all the good things of life.

Between these two classes a struggle must go on until the all the toilers come together on the industrial field, and take and hold what they produce by their labour, through an economic organisation of the working class, without affiliation to any political party. The rapid gathering of wealth in and the centring of the management of industries into fewer and fewer hands make the Trades Unions unable to cope with the ever-growing power of the employing class, because the Trades Unions foster a state of things which allows one set of workers to be pitted against another set of workers in the same industry, thereby helping defeat one another in wage wars. The Trades Unions aid the employing class to mislead the workers into the belief that the working class have interests in common with their employers.

These sad conditions can be only be changed, and the interests of the working class upheld by an organisation formed in such a way that all its members in any one industry – or in all industries if necessary – cease work whenever a strike or lockout is on in any department thereof, thus making an injury to one an injury to all. END_OF_DOCUMENT_TOKEN_TO_BE_REPLACED