One of the first active anarchist formations in South Africa after 1990 was the small Johannesburg-Lenasia-based group around Revolt and later Unrest magazines (or “zines”), a group that at one stage styled itself the “Azanian Anarchist Alliance.” Both “zines” were one-offs (one issue only was published of each, despite the numbering on the covers …). As with other anarchist groups at the time, the overseas anarchist press was an important influence, mainly UK and USA papers like Black Flag, Class War, Love and Rage, Organise! for class struggle anarchism, and others.

Profane Existence, a “political punk” magazine from Minneapolis in the USA, also bears mention. Formed around 1989, the Profane Existence group’s publication provided (in the early 1990s), an important source of anarchist ideas, and had some affinities with the British group Class War (in at least one letter column controversy, the editors even described themselves as part of the Class War Federation). The collective was also linked to a Minneapolis section of “The Anarchist Youth Federation” (AYF, founded in 1988).  The AYF published material in Profane Existence, and provided an information packet to people interested in forming similar groups elsewhere; its leaflet was influenced by the style of Class War.

The Unrest group had a copy of the AYF packet and was certainly influenced by its contents and ideas, which were a mix of materials from the AYF, other US papers like Reality Now, and other material; notably it included material on the “Black Bloc,” an idea and tactic from the quasi-anarchist Autonomen in Germany, which later became a major feature (from the late 1990s) in Western anarchism.  Some of the Unrest group joined the early Anarchist Revolutionary Movement (ARM), as part of ARM’s “class struggle” wing. When that wing was reconstituted as the Workers Solidarity Federation (WSF), Unrest was formally incorporated into the WSF paper, Workers Solidarity.

Below is a partial and incomplete scan of the AYF package, as sent to South Africa: click on the image for the PDF. 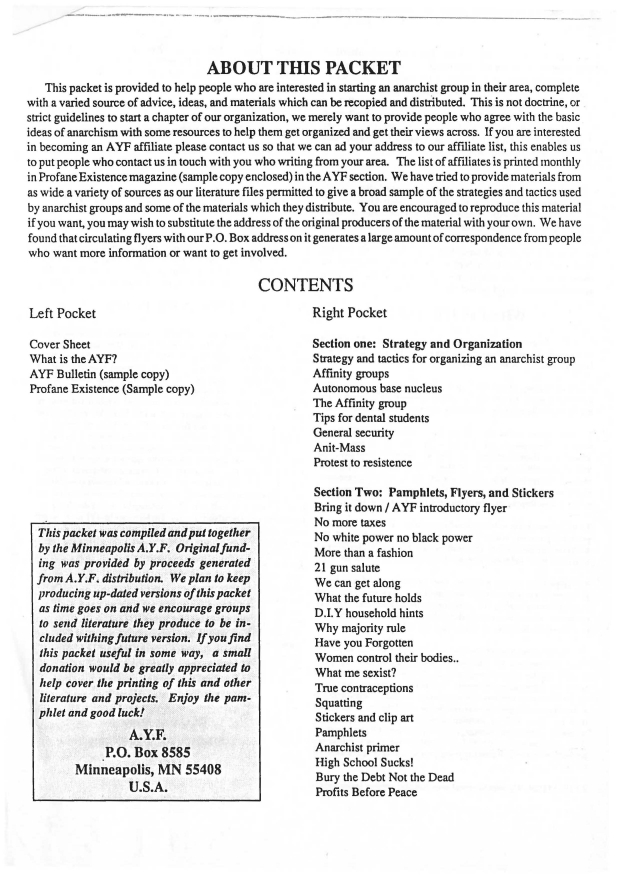