Continuing the series of 1990s South African anarchist pamphlets, here is a scan of the Workers Solidarity Federation (WSF) reprint of “Anarchist Economics: an alternative for a world in crisis”  by Abraham Guillén. Guillén was a veteran of the Spanish Revolution of 1936-1939 (the main subject of this pamphlet), and in exile in Argentina, Peru and Uruguay, was a prolific writer and militant. He wrote Strategy of the Urban Guerrilla in 1966, as well as an introduction to the Uruguayan edition of Guevara’s Guerrilla Warfare. The main English compilation of his work is Philosophy of the urban guerrilla. The revolutionary writings of Abraham Guillén (New York, 1973).

The material in this particular pamphlet seems to come from translations that appeared in the American paper Libertarian Labour Review (now Anarcho-syndicalist Review). While explicitly Platformist, the WSF at this time (as the back cover shows) referred to itself as “the Voice of Anarcho-syndicalism,” reflecting both its focus on the unions and its view that there was no contradiction between anarcho-syndicalism and Platformism. 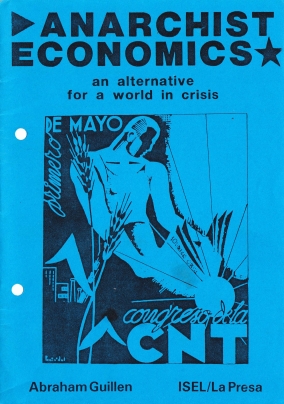 Get the PDF here