A previous post provided some Zabalaza Anarchist Communist Front (ZACF)-related and Black Action Group (BAG)-related material from # 3 the South African punk ‘zine Tales from the Pit. (The BAG was an affiliate of the ZACF).

To this can be added of Tales from the Pit:

– that it was self-described as a “D.I.Y. South African Punk Rock Zine” in the mid-2000s, based in Gauteng province;

– was largely apolitical, with the focus on music: “The zine contains interviews with bands, CD reviews, scene/gig reports, art contributions and lots of articles/essays/columns (which is of course not only about music, but political or full of social commentary)”;

– that issue # 1 (unavailable – please CONTACT this site if you can provide scans) included a piece described as “The Zabalaza Anarchist Communist Federation (in-depth, lengthy and informative interview with the ZACF)”;

– that issue #2 included the following  anarchist(ic) text, of some interest: 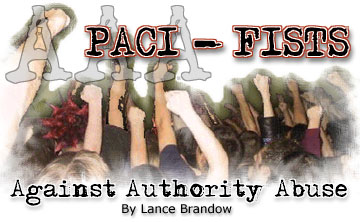 Anarchism: Defined by the American Heritage College Dictionary as “The theory or doctrine that all forms of government are unnecessary, oppressive, undesirable and should be abolished.”

Even though this definition is correct and valid, I somewhat disagree. I would rather define it as the opposition of authority abuse, and since authority is predominantly enforced by that of the government, so will we oppose the government. Yet all humans know that when another human is given power, that specific human will abuse that power.

So I pose this question; why is it that humans still prefer a hierarchy of dictatorship, immediately placing themselves at the bottom of that hierarchy?

A lot of people oppose and disagree with the American government and rightfully so. But there is more than enough injustice within our present government which requires some criticism. I would like to shed light on a couple of issues such as; South Africa is one of the largest donators of food aid to the rest of Africa, this is all good and well but I honestly believe that charity should begin at home. We as South Africans, generally speaking, voted in the government. Not the rest of Africa. I truly believe that the government should seriously look at providing the people, who voted them in, with the bare necessities.

The government also supplies 60% of Africa with power – compliments of ESKOM – yet in our own country, more than half of the population does not have any electricity to speak of. As far as ‘black empowerment’ goes, if empowering one black person and letting the others suffer is classified as ‘black empowerment’, then we definitely do have an extreme case of authority abuse. Our government has failed to serve the people that have voted them in, let alone the rest of the population. I propose a passive demonstration shedding light on the injustice!

Express your anger through punk and not through fists!

“On the duty of civil disobedience”

That’s it for now.